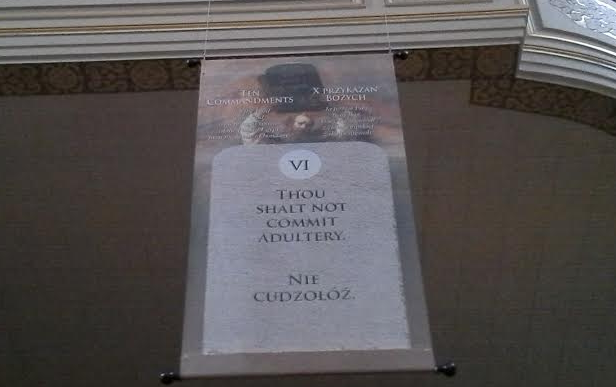 I was once told that the easiest way to remember the sixth commandment is that it sounds like ‘sex.’ At the time I thought it was just another lame example from my religion teacher.

The funny thing is – I still remember it.

What wasn’t funny, however, is that at the time I somehow thought the ‘don’t commit adultery’ commandment had little to do with me, an unmarried adolescent. I couldn’t have been more wrong.

The truth is that this commandment isn’t only for married people. It’s violated by all ages … including teenagers … almost daily.
What is the sin of adultery? Adultery is the sin of a married person who is unfaithful to his or her marriage vow. The common term used is “cheating” on one’s marriage partner. “But he who commits adultery has no sense; he who does it destroys himself.” [Prov. 6:32]

Does this Commandment apply to anyone besides married people? Yes, it forbids fornication by unmarried persons, and all actions, alone or with others, of the same or different sex, that are contrary to chastity, decency, and modesty. “Fornication” means sexual intercourse between partners who are not married to each other.

We live in a highly sexualized culture. The minute preteen Disney Channel actresses leave behind their shows, they seem to leave behind their clothes as well. It’s hard to find a magazine cover, billboard, or commercial that isn’t visually offering a whole lot more than a product. Everywhere you try not to look, it’s sex they’re selling because they’ve learned one thing: sex sells.

You can’t walk through a mall and not see a scantily clad, airbrushed, food-deprived toothpick with implants plastered across the windows of a lingerie store. Even ‘clothing’ stores highlight their lack of clothing in their window displays. It’s like the models are saying, ‘Hey look, I need to take off my shirt while I stare blankly into the distance,’ or ‘I can’t seem to stand next to this car without my breasts falling out of my top!’

Those images aren’t really selling lace, or silk, or cotton . . . they’re selling sex. Countless souls who wander by are being led to believe that ‘sexy’ and ‘attractive’ are synonymous with nudity and cleavage.

So why do those displays attract so many eyes?

And lust, violates this Sixth Commandment of ‘thou shalt not commit adultery.’ In fact, few times in the gospels does Jesus speak with heart wrenching and startling emphasis as He does when He warns of the dangers of lust. Listen to this passage from St. Matthew’s gospel:

Of course, lust is just one of the ways we violate the sixth commandment.

Even worse is when people … out of a desire to make it less shame-filled and selfish … hail pornography as something good. People think acting like it’s not a sin will magically make it less sinful.

The Commandments, in general, aren’t intended to fill souls with shame or guilt. God’s truth shines light into darkness; God’s truth points you to true freedom.

No sin is bigger than God’s grace. If this is a sin that has enslaved you or a temptation that seems too much for you to handle … it’s time to reconcile yourself with God. You need the grace of the Sacraments, particularly the Sacrament of Reconciliation, to win this battle. God’s mercy is bigger than your sin, addiction, or struggle.

How might we have sinned against the Sixth Commandment? Let’s ask ourselves some questions.